So listen up, it turns out that kids are kind of expensive! Ok so that’s not a news flash but it’s how we cope with it that matters. Since having my daughter all I have wanted is to have lovely things for her to play with, learn from and keep her engaged, which means getting creative or re mortgaging the house. So I now scour charity shops, car boots and my new favourite site Gumtree for books, puzzles, toys and treasures (If you haven’t used Gumtree before, take a look it really is a godsend). I had been looking for ‘playhouses’ online but seeing as you can’t get a decent one for less than £150 it meant going second hand. Gumtree didn’t let me down, I managed to get one from a local family for £55. It meant dismantling and re building it but thanks to my husband we managed to get it together, and with a little inspiration and a load of paint I got to it. Living near the sea I wanted to go with a beach hut style theme but I also didn’t want to spend too much money, so I looked for things that we already had. We had leftover white paint from past DIY jobs so that sorted the inside and the outside base coat. I did have to buy the lovely pale blue paint but that was less than £10.

For the inside decor I was lucky that we already had two lengths of ‘Boden’ bunting which had been free when I bought some baby clothes there. For the pictures on the walls I used the Ikea frames that had made up our family gallery at our wedding which were in the loft collecting dust. (There is no glass in the frames just clear plastic so nice and safe) The nostalgic side of me means I always find it difficult to throw out Birthday cards, which is just as well as I used them to put in the frames along with a few photos. I stuck them to the walls with ‘No More Nails’ as I didn’t want real nails in there for obvious reasons or for the pictures to be taken down by kids. The cushions had been earmarked for the charity shop but fortunately I ended up holding them back thinking they would come in handy for something just like this.

Now I am particularly happy with how my toadstool turned out! It was originally a wooden plant pot stand (don’t ask me why I bought it in the first place!!) but it had ended up in the garden and was going rotten. So I bought some Plastikote red paint and got spraying. I then used the dregs of an old pot of varnish for the body and some leftover white paint for the spots and ‘voila’ a finishing touch for the house. I like to think that my daughter will think that fairies live in it!

From rotting old pot stand to…

So that is my first garden kids project but I think it’s just the start. It’s made me want to do lots more, I’m not sure what will be next but I’ve been having a good look on Pinterest for some inspiration. Check out some of these brilliant ideas. I love the idea of having a direction signpost to point out where friends and family live. All the pictures are linked here on my Pinterest board so you can follow the links to the clever people behind them and information on how they made them.

A bit more of a challenge but such an impact.

Recycle old tyres, they’re not just for swinging in!

Home made shade, so easy.

Who knew a Little Tikes house coulld look so stylish!

I really want to do this one and point out where all our friends and family are. 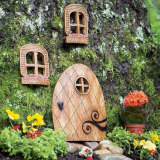 Open their imagination to elves and faries. 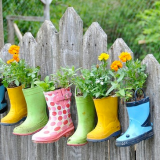 What to do with all those old wellies? Here you go!

Brighten up a wall or fence and encourage wildlife to your garden. 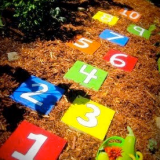 A great way to use up old paving slabs, or even squash some weeds!

Now that the sun has started to shine here in the UK I hope you will be inspired to get creative too.