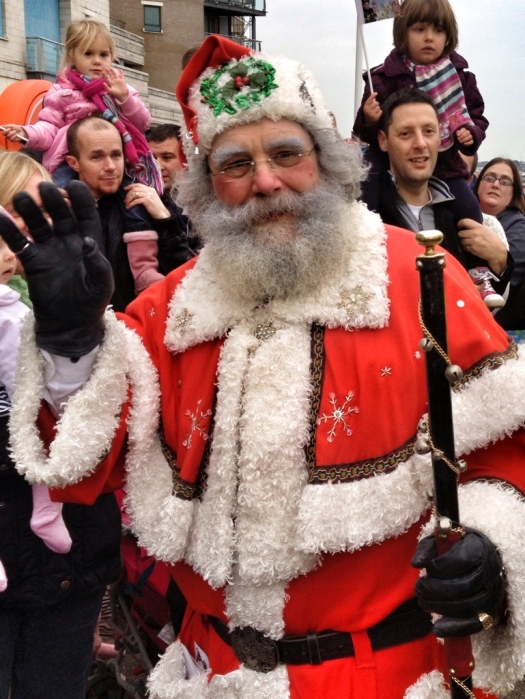 Yes I know it’s only November, but down here in Poole the Christmas season has officially begun. Why? Because Santa has arrived that’s why. Fantastic I say, I’m not one to bah humbug at Christmas songs in shops before we even get our advent calendars out, I love it. This time of year can seem pretty grey but the thought of twinkle lights and baubles as far as the eye can see makes me feel warm and toasty inside. There’s nothing better than hearing the opening bars to Fairytale in New York for the first time each year. In fact, as I write this I have Dolly Parton and Kenny Rogers Christmas album on to get me in the mood, I’m not even joking.

So when I saw that Father Christmas himself would be arriving at Poole Quay via RNLI lifeboat (and why not) this past weekend I said to my husband get yer coat we’re off to join in the fun. Having a two year old who is just starting to grasp the concept of, well, many things, makes events like this all the more important. Seeing her fascinated face at the crowds and the hubbub just adds to the day. 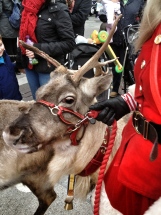 The parade, and organising of getting Santa to Poole all the way from the North Pole, was thanks to the Dolphin Centre and they put on a great event. The Quay was packed with people and children all hoping to get a look at Santa and his reindeer. Everyone down here is hugely supportive of the RNLI so it was lovely to have them bring Santa in to the dock along with this years Lighthouse Panto star Debra Stephenson.

Once Santa had arrived to great cheers and applause and to pose for pics it was time to get the parade underway. (I must say St.Nick was looking particularly good, nothing worse than a substandard Santa!) The streets were lined all the way to the Dolphin Centre where Santa would arrive at his grotto. There were stilt walkers, walking toys, elves a plenty and even a full size Chitty Chitty Bang Bang. Chris Jarvis (parents will know him from CBeebies) also walked the parade representing the Bournemouth Pavilion Panto of Aladdin. Charity ‘Julia’s House‘ had a great presence too, some of you may have seen the very moving segment on them on Children in Need. They are ”Dorset’s only hospice dedicated to children with life-limiting conditions”.

Personally I think days like this are really important. Not just because they often support a charity but because it is supporting your local businesses. We all know that the high street is in trouble so anything that gets us into our towns and High Streets rather than doing all our shopping online is a good thing. It also gives you that sense of community which sometimes feels like it is slipping away. Standing side by side on a street cheering grown men and women dressed as elves is good for the soul! It made me think about Panto for the first time in years too. I haven’t been since I was a kid but now that I have a little one I’m thinking yes I want to go and shout ‘he’s behind you’ and hiss at the baddy and laugh at all the double entendre that went over my head as a girl. The Pantomime is a great British Institution and Poole Lighthouse is lucky to have a great line up for this years ‘Jack and the Beanstalk’. As I said before, it stars actress and impressionist Debra Stephenson and actor Patrick O’Kane fresh from Game of Thrones and The Borgias.

But if you are more of an Aladdin kind of fan then get yourself to Bournemouth Pavilion where you can boo and hiss at Eastenders’ very own Scott Malsen as Abanaza, (one for the mums) Or why not go to both over the festive season.

Make sure to have a look at what’s happening in your area, we only went to this event because I happened to look on the Bournemouth Tourism site that very morning. I will now make sure to follow them on twitter and facebook so I never miss a thing along with Poole Tourism.

There are lots more Christmas events happening around here, so I will be sure to check as many of them out as I can and report back. Who has the best Santa and who has the best decorations and mulled wine..hic…

Until then have fun planning what you are doing for Christmas, and let me know if you find an amazing Santa’s Grotto.